Removal of Support for Android C2DM by Google

Google announced that starting in April of 2015, its Android Cloud to Device Messaging (C2DM) would be fully deprecated and would no longer be supported. C2DM was replaced by Google Cloud Messaging (GCM), the next generation of C2DM. To ensure that all Spok Mobile users continue to receive messages, users who have a legacy version of the Spok Mobile (Mobile Connect) application should upgrade to the newest version of the application. More specifically, versions 2.3-3.1 of the Spok Mobile Android application will no longer function as designed due to the removal of Android C2DM.

Support for New Relic was added to iOS. This gives Spok the ability to gather more complete, comprehensive performance information to help identify and fix performance limitations and issues with the Spok Mobile application. Gathering this information will help Spok improve the overall quality and performance of the application. Please note that New Relic support is only available on iOS devices at this time. The ability for users to silence alerts with the volume control button on the side of Android devices was added. Now users can use the button to silence Spok Mobile alerts that are received on the device.

More specifically, the Spok Mobile application has the ability to work with the following Android wearable devices:

For more information, please refer to the User_Guide_Spok_Mobile_Android_Wearable_Devices document.

Spok Mobile does not support Apple Watches. For detailed information about how to set up Apple Watches, please refer to Apple’s technical documentation.

The ability to forward message text was added during this release. This allows users to quickly and easily send an exact copy of text or attachments to another recipient in a Spok Mobile message. Message text and attachments can be forwarded from a chat bubble and from the “Messages” screen within the application. The usability of the site selection portion of the application’s drawer was improved by adding a “Cancel” and a “Done” button, which allows users to choose the desired button to more easily choose the site or status that they would like in the drawer.

The ability to control the application’s font size was added. This allows users to change the size of the font that is used in the message chat bubbles and in the “Messages” screen in the Spok Mobile application. 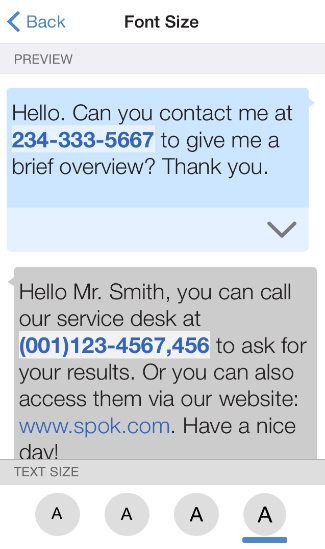 This section includes information on issues that were found and still exist in the application during this release. Please note that upgrading to the newest version of the Spok Mobile application helps decrease the number of issues that may be experienced.